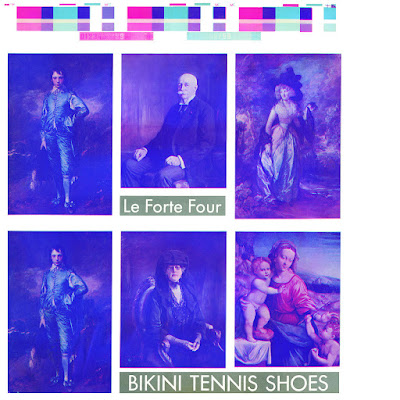 Le Forte Four were the earliest group in the collective of avant-garde music anarchists known as the Los Angeles Free Music Society (LAFMS). With their music combining loose experimental improvisation on both conventional instruments and household items with stuff taped off television cartoons or taken from records as well as lo-fi electronics, Le Forte Four were pioneers of sampling, even as their D.I.Y. ethic paved the way for the punk movement a few years later. In the summer of 1973, Chip Chapman, along with two brothers, Rick and Joe Potts, formed the Patients and recorded some material in the Potts family living room, which mostly consisted of the group arguing as they rehearsed Zappa's "My Guitar Wants to Kill Your Mama," and the Who's "Boris the Spider." A few months later, much to the chagrin of the other members, Chapman sent an excerpt of this to the Norway Electronic Music Festival under the name East Los Angeles Free Music Society.

In 1974, the group adopted the name Los Angeles Free Music Society as they worked on their first album, but by 1975 they had become Le Forte Four with the addition of another Potts brother, Tom Potts, and LAFMS was used for the name of their label. That first LP, Bikini Tennis Shoes was released later that year. Through the record, Le Forte Four were discovered by another group of avant-garde noise-makers who hung out regularly at the Poo-Bah Record Shop in Pasadena, and soon the whole LAFMS scene took off as the various artists inspired each other. By early 1976, Le Forte Four gigged regularly with other LAFMS artists like the Doo-Dooettes and Ace & Duce. One of those concerts, from July of 1976 at the recital hall of the Brand Library, was released as the LP Live at the Brand later that year. A third record, Spin 'n' Grin, was released in 1981, offering a retrospective of earlier material. By that time Le Forte Four's members had moved on to related LAFMS projects and Le Forte Four were dissolved.