The Kinks- This Strange Effect

Nothin' in the world can stop me worryin' 'bout that girl

Wes Anderson writes in a booklet:
"I Originally wanted to score the whole movie of 'Rushmore' with songs by the Kinks. I thought this made sense because the Kinks played loud, angry, teenage rock songs, and they wore blazers and ties; and our movie is about a teenager who is loud and angry, and he is almost never seen without his blazer and tie (until he switches to a green velvet suit). I eventually expanded this concept to include the whole British invasion, because they all basically dressed like that.Then we did some research and started making tapes labeled SCHOOL MOVIE MUSIC, which I listened to on road trips while we were writing the script. Sometimes I put the same song on a tape five or six times in a row, because your mind wanders when you're on the road, and repetition helps you focus your concentration. We played lots of this music on the set during the shot in Houston with a Bose stereo that Bill Murray got for us. My assistant had to lug the Bose around and get electricians to give her extension cables, and the inconvenience of that eventually led her to quit, although there were probably other factors which i don't know about. At the end of the shoot Murray gave the Bose to one of the make-up people. The only song we used</b> * </b>that's not British Invasion is the Yves Montand rendition of 'Rue St. Vincent', but I think that's a good one to stand on its own.
Thanks very much, and I hope you enjoy this album."
Wes Anderson 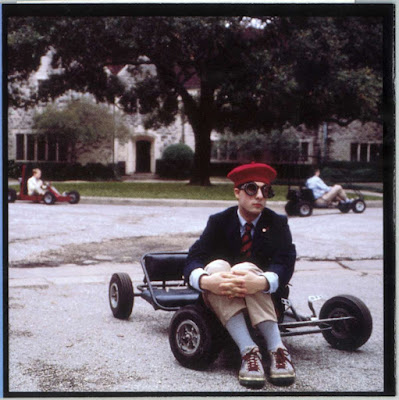 Get the Killer down on tape right and we'll make millions

Larry & The Blue Notes - Night Of The Sadist

The Dead South - People are Strange

THE SANITIZERS - Kiss Me, I’m Vaccinated

Beware of The Blob! It creeps, and leaps, and glides and slides across the floor, right through the door, and all around the wall, A splotch, a blotch - Be careful of The Blob

THE FUGS- We're The Fugs

Iggy and The Stooges - Scene of the Crime